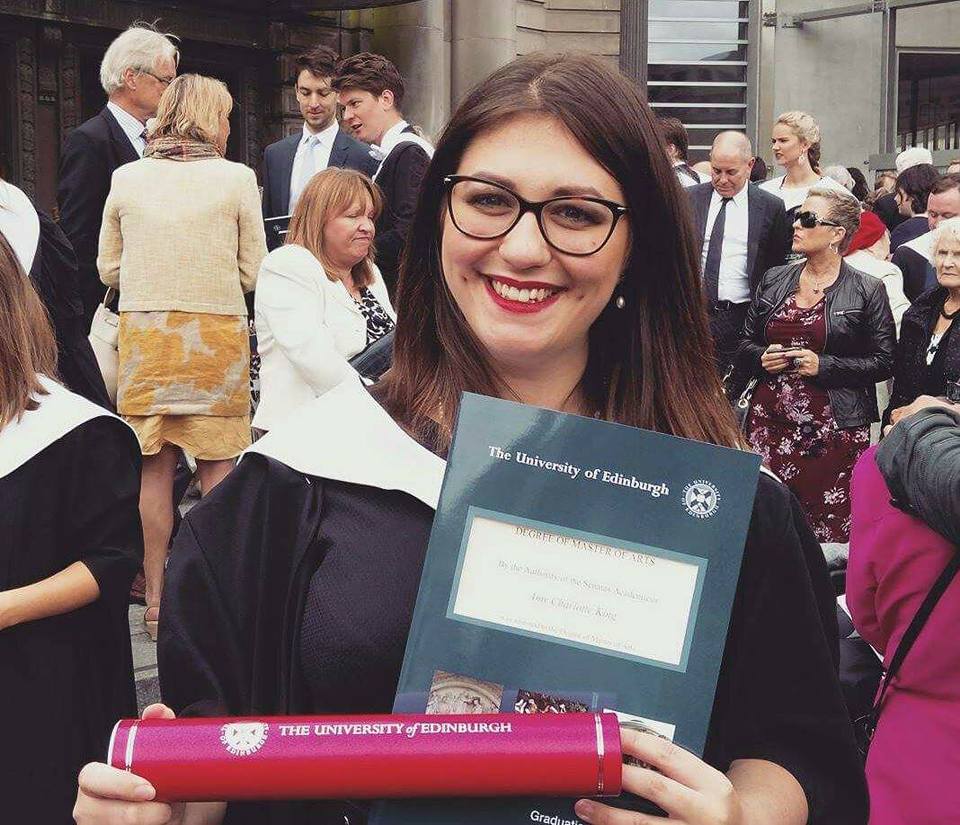 Sometime between 11am and 1pm today I was donked on the head with a bonnet symbolising my freedom from the enslavement of education. I was then handed a certificate and scroll and there marked the official end to my undergraduate degree. 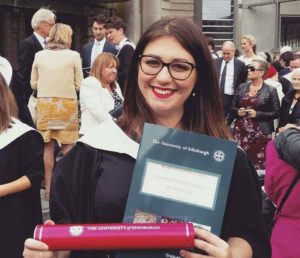 A few short months ago I wasn’t sure I would be walking across that stage, focussing intently on ensuring one foot did in fact go in front of the other so as not to end up on my backside in front of hundreds of people.

A few short weeks ago I never would have dreamed that my face would be splitting in two with a wide smile and a tear in my eye.

A few short hours ago I did both those things. My name was called, I crossed that stage and with that I gained my degree from the University of Edinburgh.

I couldn’t have done it without the most amazing support network of family, friends and university staff. If I was to list them all I’d be typing well into the night, but I am so very thankful to have had their support, advice, shoulders to cry on and shot glasses to fill next to mine.

To continue the good news, my manager told me on Friday that I have had my contract extended for a further 3 months probation!

All the celebrating will be happening, but not right now. The excitement has gotten to me, as has standing for multiple photographs and the most delicious seafood platter from Fishers in the City (highly recommended) so for now I think I’ll go for a nap. Because now that I’m a graduate I decide my own future, right?

I got my graduation classification today. I am graduating with a 2:2. Second Class: Lower Division. Also known as a Desmond.

At first, I’ll admit I was gutted. I still am a little upset. I have worked myself ill at times throughout my degree, and worked despite being ill, and at first glance it all seems for nought.

A 2:2 is regarded as a less than desirable degree classification. I get it. It doesn’t seem that great. But, and it took me a long time and a lot of people telling me it for me to really believe, it’s not the end of the world.

In my third year at university I struggled a lot. I found the jump from pre-honours to honours huge. It was hard to keep up with the workload. My mental health suffered a lot. It wasn’t the first time I’d been bad at something (thank you, Higher Maths, for preparing me for this moment) but it was the first time I’d struggled so much and felt so helpless to stopping it.

I got better, my grades went up, I started getting high Bs and As. I was happy. I was healthy. Unfortunately it didn’t last and I got ill again. I had reached out for help and received little in the way of constructive advice, so I was on my own again. But I wasn’t. I have the most incredible friends, family and flatmates that anyone could ask for, who made sure I got through it. I got a 2:1 for my dissertation. I handed in every piece of coursework. I finished uni.

See, that’s something that I didn’t realise at first was so important. I actually finished four years of a university degree. I was in two minds about returning for 4th year. I didn’t see the point because my grades were so varied in third year. I focussed on the classes I did badly in, not my successes.

I am graduating. I’ll have a degree behind me, regardless of the classification. I stuck it out for 4 years despite wanting to throw in the towel so many times. I did it. I actually did it.

So I’m not going to wallow in self-pity about my average grade. My grades range drastically – a 30% difference from highest to lowest. My enjoyment of university has ranged just as drastically. But my dad always stressed one thing from the very beginning:

You don’t go to university for the certificate on your graduation day.

Sure, getting your degree is great and will open lots of doors and give you a major leg up when it comes to finding a job and hopefully you learned something. But, more importantly, university is about growing up. It’s about living in a strange city with strange people doing strange things for four years.

It’s about going out. Getting drunk. Having fun. Spending too much money. Exploring new places. Having cups of tea at four in the morning. Making the most of your student discount. Debating politics at the dinner table. Ordering more Dominos pizzas in a week than a person should eat in a lifetime. Never learning to leave your card at home when you’re going to a bar or club. Getting too drunk to get into The Hive. Being too sober to contemplate going into The Hive. Library hysteria at 1am in a pod on the ground floor with your friends. Deep meaningful conversations with strangers in club toilets. Sitting in lectures with your drunk friend who’s braless and muttering insults about your lecturer while she draws cartoon pictures of you and being very proud of her artwork. Living with the same girls for four years and walking into a flat that feels like home.