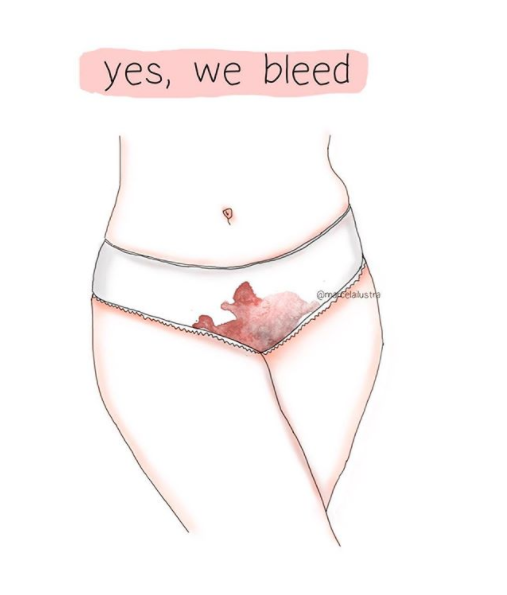 Today, I’d like to discuss periods, because they happen.

I’ve never really had a good experience with my period. I was a late starter and my first year’s worth of periods averaged a fortnight each time. Let me tell you, that’s a lot of blood.

Since I started the monthly cycle of doom back in high school, I’ve always used pads. I mentioned in a previous blog post that I tried a tampon once, but I found it uncomfortable and decided pads were the better option for me.

My last period was horrendous. I was curled up on the sofa, clutching a hot water bottle and being reduced to tears with every bout of cramps that hit me. My day’s plans were ruined and I was forced to seek comfort in piglet GIFs and watching Tam build Ikea furniture. Not a bad way to spend a Sunday, certainly, but a flea market and custard tarts would have been better.

So, while wallowing in this period pity party, I’d noticed that my sanitary pads were really irritating me. It’s something I’ve noticed more and more recently. I’ve lost 3 good pairs of knickers to blood stains thanks to pads that have slipped and I’m not willing to lose a fourth pair. Especially not the Disney Villains ones I’m wearing just now.

With that in mind, I decided to research alternative period products and see whether any of them might suit me. It turned out to be an interesting read, so I thought I’d share my findings with you!

First up is the menstrual cup. According to WebMD, they’ve actually been around since the 30s, but only recently became more popular  (thanks social media!). Much like the name suggests, it’s a small cup that you insert to catch your blood flow during your period. They’re usually made of silicone or latex rubber (so if you have allergies, there’s an alternative option for you!) and they’re pretty neat!

Most menstrual cups are reusable, so they’re fantastic for the environment. They’re also able to be kept in for up to 12 hours (unlike your pad or tampon which need to be changed more regularly), so you won’t be caught out at work by forgetting to pack a couple spares in your bag. You’re also far less likely to suffer from Toxic Shock Syndrome using a menstrual cup than a tampon, which is a huge plus!

Menstrual cups do take a bit of trial and error to find one that fits. Just like condoms, menstrual cups are not one size fits all. They are generally categorised by age, flow and whether you’ve had a child. And if you’re squeamish and get grossed out if the slightest drop of blood hits you as you’re fixing yourself up down below, you may want to stay away from the cup. The clean up and rinsing can be messy. Some menstrual cup makers warn against use if you have an IUD, but according to WebMD a study was carried out in 2012 which found no evidence of a problem. If you’re worried, chat to your GP!

The cup interests me. I know there has recently been a huge push in providing them in impoverished communities and those where periods are currently taboo and a lack of education is causing danger to those who have them. I think I’m going to give this one a shot!

I’m fascinated by the concept of period pants. While I don’t think free bleeding is a viable option for me, the thought of not having my nether regions encumbered by plastic or cotton wool or rubber sounds too good to be true!

At their core, period pants are ultra-absorbent and anti-bacterial so you can wear them all day long. There are lots of brands out there, but I’m most interested in Thinx. They provide multiple shape options for the comfiest knickers that suit your flow.

Reusable, wallet-friendly in the long run and so much better for the environment than any throwaway products currently on the market, I’m totally sold on period pants!

It looks a bit like a condom, and to be honest it’s not that far off one. The soft cup has a rubber ring at the end and is another insertable product. This fantastic blog post from The Flex Company (they sell menstrual discs in the UK) explains the differences between menstrual discs and menstrual cups really well – I’d recommend a read!

Menstrual discs hold the equivalent volume of blood as three super tampons, and last up to 12 hours before needing emptied. This makes them convenient for those who suffer a heavy flow and a hectic schedule. They do have to be thrown away, but they create less waste than tampons or pads because they last longer.

The huge benefit of the menstrual disc, which for many women is a huge selling point, is the fact that the menstrual dics lets you have mess-free sex while you’re on your period! For a huge number of women, the horn factor is amplified tenfold while they are on their periods. Period sex can be messy at best, and resemble an outtake from Carrie at worst.

This product revolutionises and encourages women to embrace their sexuality at a time where they’re more likely to want sex, but feel like it’s not a viable option. As a sex positive person, this gives the product huge bonus points in my book!

I’m unsure whether this product is for me because I’m not so keen on insertable period products. My cramps are bad enough and I don’t want to exacerbate them by pushing and prodding my poor downstairs unnecessarily. However, I’ll probably try it out for science.

Sounds like a squelchy critter from the depths of the ocean, and to be honest it’s not far off! They do come from the sea and they’re a great natural alternative to a tampon. They absorb the flow and can be rinsed and reused (they last 6-12 months), so they’re an affordable option as well.

According to Dr Jen  Gunter, a lot.

Sea sponges have not received much in the way of testing. Prompted by an article in Glamour highlighting sea sponges as a great alternative (which is where I first came across them), Dr Gunter felt obliged to do some myth busting.

Sea sponges aren’t “like” bath sponges they ARE bath sponges…they are untested and potentially very unsafe. Oh yeah, they are also filled with dirt.

The concerns about sponges were so significant the FDA contacted the manufacturers of menstrual sponges to warn them of the risks and to require they stop marketing and selling the products.

So as pretty as they can look, and as much as they might answer the age old question of how mermaids deal with their periods, I think I’ll stay away from them for now.

I’m excited to do some more research and get buying some new products to try out! I’ll be sure to write a review post in the New Year once I’ve had a chance to test drive them and form opinions on how they fit with my lifestyle (and my body!).

In the meantime, I guess I’ll just have to hope the period gods are kinder to me and let up on the unbearable cramps and heavy flow.

Bleed on, dear friends, bleed on.

One thought on “Period Products”